Scientists from the U.S. and Canada say Arctic warming is reducing the food supply for polar bears. The animals are forced to look for food at waste sites. That is causing problems for both the bears and humans.

A report on the scientists’ findings recently appeared in the publication Oryx.

Polar bears normally hunt seals. But a warming climate is reducing the amount of sea ice. The bears need sea ice in order to move around and find seals.

With the usual food running low, the bears are coming off the ice and onto land. They get closer to areas where humans place waste, including bones from whale hunts and used food packages.

The bears often end up eating the food packaging when trying to get to the food inside. Since their bodies cannot break down the material, the bears can develop blockages that can result in sickness and even death.

In addition, people living close to the area where waste is collected sometimes shoot the bears because they fear the animals might hurt people.

Andrew Derocher is a biologist at the University of Alberta in Canada. He helped write the report. He said, “Bears and garbage are a bad association.” Derocher added that scientists have already seen black bears and brown bears eat food waste in other parts of the world. “Now,” he said, “it’s an issue developing with polar bears.”

The bears have been found at garbage collection places in Russia and in the American state of Alaska.

Scientists say the problem will only get worse for the bears as more humans move into their territory.

One area where the bears live is Nunavut, Canada. The human population there is expected to increase by over 40 percent by 2043. 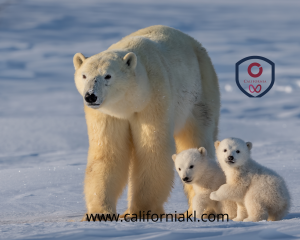 As more humans move in, the waste becomes more of a problem because it is hard to manage in frozen lands. The ground is frozen, which means the garbage cannot be buried. It is costly to send the waste out on trucks. The scientists say more government money is needed to help the problem.

Derocher said meetings between people and bears are increasing already.

“It’s surprising just how many places that never had polar bear problems are now having emerging issues,” he said.

Dan Friedell adapted this story for Learning English based on a report from Reuters.

packages – n. a wrapper or container that holds something

garbage – n. things that are no longer useful or wanted that have been thrown out

association – n. a connection or relationship between things or people